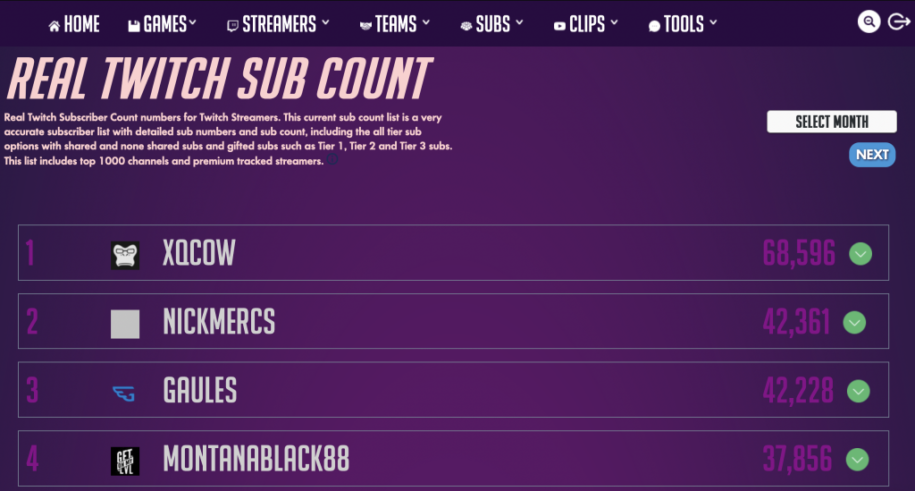 A large portion of a Twitch streamer’s revenue comes from the channel subscriptions they get. Only Twitch affiliates and Partnered streamers are allowed to receive subscriptions.

Every month, the channel owner receives 50% or half of all the subscription fees earned. More popular channels get 60% or even up to a 100% of the subscriptions as their monthly share.

Each subscription tier receives ad-free viewing, subscriber badges, and custom emotes according to their sub plan. Key benefits are usually listed on the channel’s page for people to check out and decide which tier they will purchase.

There are also other ways to get a channel subscription. For example, if a person has an Amazon Prime subscription or a Prime Gaming subscription, he/she can subscribe to one Twitch channel for free every month.

For these types of subscribers, the streamer receives half of the Prime sub which amounts to about $2.50. The same income they earn from Tier 1 monthly subscriptions.

When streamers get more subscribers on Twitch, the more income they generate.

To get a rough estimate of how much streamers earn, we can take a peek at their Twitch sub counts.

Can You See How Many Subs a Streamer Has?

Sad to say, the platform doesn’t publicly display a streamer’s subscriber count by default. Only the channel owner and the mods can see these stats.

As a viewer, follower, or even a subscriber, there is no sure-fire way to see the exact number of subscribers a streamer has. Streamers don’t really need to share an accurate subscriber list.

However, there are ways for people to know a channel’s subscriber count. We will discuss five methods that you can do to know the sub number of a streamer.

A popular way to check a streamer’s subscriber count is through the use of third-party clients. One such website is TwitchTracker.

The site claims to have an accurate count of subs for the channels on their list. You can even see the breakdown of tiers of subscribers in number and graph form.

If you own a channel, you may sign-in on the site to allow TwitchTracker to retrieve your data from Twitch.

Although, if the channel owner did not connect their Twitch account to this site, then the number of subscribers they display on TwitchTracker is questionable.

With that in mind, don’t take their sub count as accurate. But, at least, you get an idea of how many are subscribed to those major streamers.

Twitchstats.net is quite similar to the first one we discussed. Streamers can connect their Twitch account to the site to let it track their stats.

The difference you quickly notice is that you don’t get to see the breakdown of the tier subscriptions. You just get an estimate of the current and daily sub count.

What’s good about Twitchstats.net is that they do have smaller channels on their database. Simply search for the streamer’s name using their search engine.

Some streamers like to have a Subscriber Goal Count. It can either be a daily, weekly, or monthly total. The sub count graphics are usually on display during their live stream.

Every time a person subscribes, the number is added to the channel’s goal meter. This makes the count almost real-time.

So, if you want to get an idea of how many subs a channel gets, look for the sub goal count on their stream. You can add up all the numbers if it’s a daily or weekly count to get a monthly total.

This method takes some effort to do, but you get an accurate number of subscribers in return.

Other streamers like to acknowledge their subscribers individually. They set up SteamElements Leaderboards on their channel page to display the name of people who subscribe to their channel.

You can scroll through the list to see how many people have subscribed. This will give you a rough estimate, but not the actual monthly count.

If the streamer you want to check out is not listed in any of those third-party sites or they don’t have the sub count on display, you can try this as a last resort.

If you’ve been active in the channel chat and have formed a somewhat close relationship with the streamer, you can try sending a whisper to ask them directly. You might get lucky.

If you’re interested in starting a streaming career, check out the sub count in your chosen niche. If many people are willing to pay to watch it, then go ahead and do it.