How Old Do You Have to Be to Stream on Twitch? 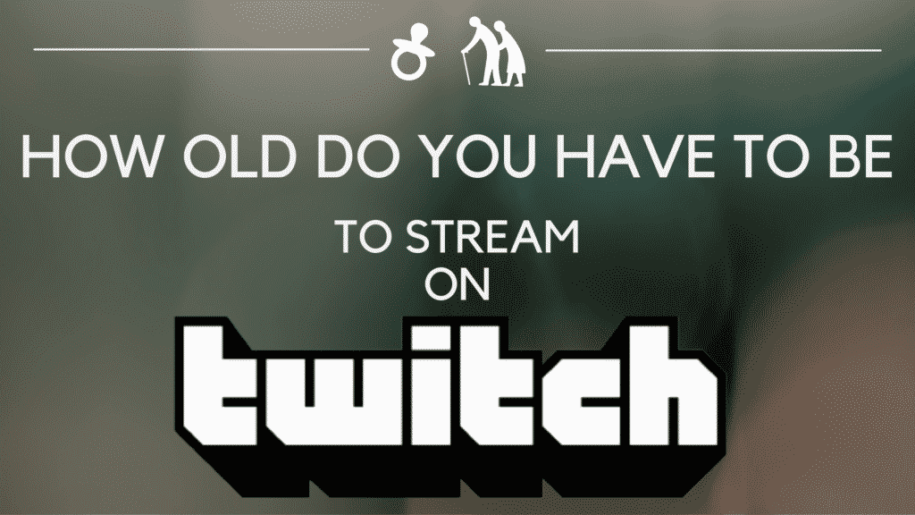 Posted by Maddie Schultz on November 22, 2022 | Featured | No Comments

Twitch is the unrivaled home of the gaming community. It has about 140 million active users every month and an average of 31 million active daily users this 2022.

And who loves games more than any other age group? It’s kids.

But, surprise! Children are not allowed on the Twitch platform, either as a streamer or just as part of the audience.

Well, here’s the thing. Twitch is not just filled with child-friendly games. As the streaming platform grew in popularity, all sorts of other entertainment and non-gaming channels also emerged on the site. So, it’s not exactly a safe place for highly impressionable minors.

To figure out the question “how old do you have to be to stream on Twitch?”, let’s delve into the site’s Terms of Service and get a picture of the current situation on the platform.

What Is the Age Limit to Have a Twitch Account?

According to the data from Twitch, almost 75% of their viewers are aged 16 to 34 years old. Here, we can see that a lot of teenagers are already hooked on the site.

But what exactly is the age limit on Twitch?

Let’s take a look at the platform’s Terms of Service. Here are their rules regarding the age limit:

So, any person younger than 13 years old cannot have a Twitch account of their own. And also, they cannot use another person’s account to access the site.

Once the person is already 13 years old, he/she can legally create an account on the platform. But, if they are still under the legal age, they are required to have an adult with them whenever they go on Twitch.

For any person that is of legal age and up, Twitch is your playground.

Technically, any person below 13 years old cannot create an account on Twitch. The platform will suspend or terminate accounts that are found to be used by persons under 13 years of age.

Even if the account is owned by a person of legal age, if found to be used by a minor, the account will still be subjected to sanctions implemented on the site.

But, as it is, anyone can watch most streams on the platform without even having to sign up for a Twitch account. If so, how can this rule be enforced on the site?

This is where Twitch implores the help of the whole Twitch community. If anyone notices or suspects that a child is on a Twitch stream or chat, they are encouraged to immediately report the suspected account or user.

How Old Should You Be to Stream on Twitch?

Almost anywhere across the globe, children under 18 years of age need adult supervision when performing actions that are governed by laws.

So, if you are between 13 years old and the legal age in your area, a parent or guardian is always required to be supervising your stream. Even if the underage streamer is capable of live-streaming on his/her own, an adult is still needed to ensure their safety.

To legally stream on the site, you have to be at the age of legal majority, which is usually 18 years old for most of the world.

Can Kids Stream on Twitch?

No, the platform does not allow users and, most importantly, streamers who are below 13 years of age.

Just being on the site means that kids are constantly in danger of being exposed to mature language and inappropriate content. This is why Twitch has taken the initiative to restrict children below 13 years old from using the site. Channel owners found to violate this rule are subject to being banned from Twitch.

However, there are instances wherein streamers would feature their kids or their younger siblings in their live broadcast. This practice is unacceptable on the site and should therefore be reported by viewers and stopped upon encounter.

And then, there is also the issue of Twitch not having enough resources to monitor their users. A child could just as easily create an account using fake credentials and start streaming without a camera that shows their face.

The tech-savvy minor can just live-cast their computer screen while playing a game and use a voice manipulator to hide their real age. No one can tell the streamer’s age in this situation.

It is difficult to stop minors from infiltrating the site even with the restrictions currently in place. Therefore, it is now up to the parents, guardians, and the Twitch community to keep children safe and away from the platform.

The children will have to wait until they come of age and have a mature mindset before they are allowed to Twitch. But until then, they can just spend their days watching on YouTube Kids while they wait.

Why Is Twitch So Strict?

On average, users on the platform watch about 95 minutes of video stream every day. Twitch does not have control over what viewers choose to watch on the site during this time.

Also, streams are broadcasted in real-time, making it difficult to monitor and filter content. That is why the company would rather prevent underage kids from entering and joining the site altogether.

Here are the contents on the platform that are not safe for kids:

The platform lets broadcasters tag their stream as intended for mature audiences. This gives them the freedom to use adult language and inappropriate content.

Some streamers impose rules against the use of explicit language in their video and chat. But there are still instances when your favorite streamers use swear words out of shock and pure emotion. It can’t be helped.

Even the music on Twitch that streamers use can contain explicit language that viewers are exposed to.

There is a wide variety of games available on the market. The ones that are especially popular now are FPS (first-person shooter) games that involve violence and shooting other characters in the game.

Other gaming streams also display horror and gore that are too unsettling to handle for kids. There are even titles that are banned on Twitch, which are just too much even for the site.

Online gambling is also popular these days. Streamers who feature such content can unintentionally teach children how to gamble. And we all know how gambling can become an addiction.

This also goes for streamers who smoke or simply discuss the use of substances in their broadcast. Since there are places where marijuana use is legal, streamers openly talk about it and even smoke on a live broadcast (though this is not encouraged).

Children should not be exposed to content that may lead to addiction. They are very impressionable and may not know yet what is right from wrong. They do not have the capacity yet to make mature decisions.

As the popularity of the site grew, it attracted lots of people with diverse characters. It was inevitable that some of these individuals are of the unsavory kind.

Some people come on the site to specifically target minors. They talk to the kids, sending them direct messages to get information to use and hurt them.

This is especially dangerous since children are mostly naive and would easily give out personal info such as their full name, their home address, phone number, and school.

A lot of games are competitive, and so, toxicity comes with the territory. Bullying, hateful speech, and the likes can cause emotional and psychological damage that cannot be detected early on.

Though users and streamers can be reported, muted, and banned for displaying that kind of inappropriate behavior, the damage has already been inflicted.

It is impossible to undo the hurt that the people are subjected to. And it is especially detrimental to children who are just developing their identities.

If you’re aiming to be the next big streamer on Twitch like Ninja and Tfue, remember that it’s not just about how many subs streamer has. Abiding by the community guidelines is also important.

It doesn’t matter that almost half of the users on the site are very young. It is still not advisable to include underage kids in broadcasts nor entertain children below 13 years old in your audience and chat room.

If your target is to gain more followers and subscribers on Twitch, employ other methods that are more morally acceptable. You will have a clear conscience and worry-free streaming if you know that you are doing it right.